Posted by Tim to BitLocker Solution on Septemper 16th, 2015

BitLocker is a full disk encryption feature included with selected editions of Windows Vista and later. It is designed to protect data by providing encryption for entire volume. By default it uses the AES encryption algorithm in cipher block chaining (CBC) mode with a 128-bit or 256-bit key.

What is BitLocker drive encryption

BitLocker drive encryption is a data protection feature available in Windows Server 2008 R2, Windows Server 2012 and in some editions of Windows Vista/7/8/8.1/10. Having BitLocker integrated with the operating system addresses the threats of data theft or exposure from lost, stolen, or inappropriately decommissioned computers. Data on a lost or stolen computer is vulnerable to unauthorized access, either by running a software-attack tool against it or by transferring the computer's hard disk to a different computer. BitLocker helps mitigate unauthorized data access by enhancing file and system protections. BitLocker also helps render data inaccessible when BitLocker-protected computers are decommissioned or recycled.

There is no Mac version of BitLocker. How to access BitLocker encrypted drive on Mac computer?

M3 BitLocker Loader for Windows is a free encryption software to create an encrypted container which is compatible with BitLocker Drive Encryption so that the USB flash drive or external hard drive is protected by BitLocker on Windows 10/8/7 Home and Windows 7 Professional. 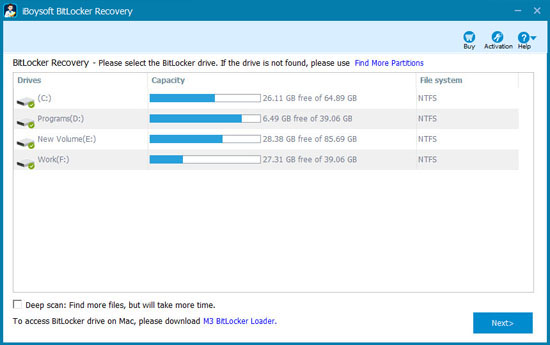